More about “ALONE” and other memories 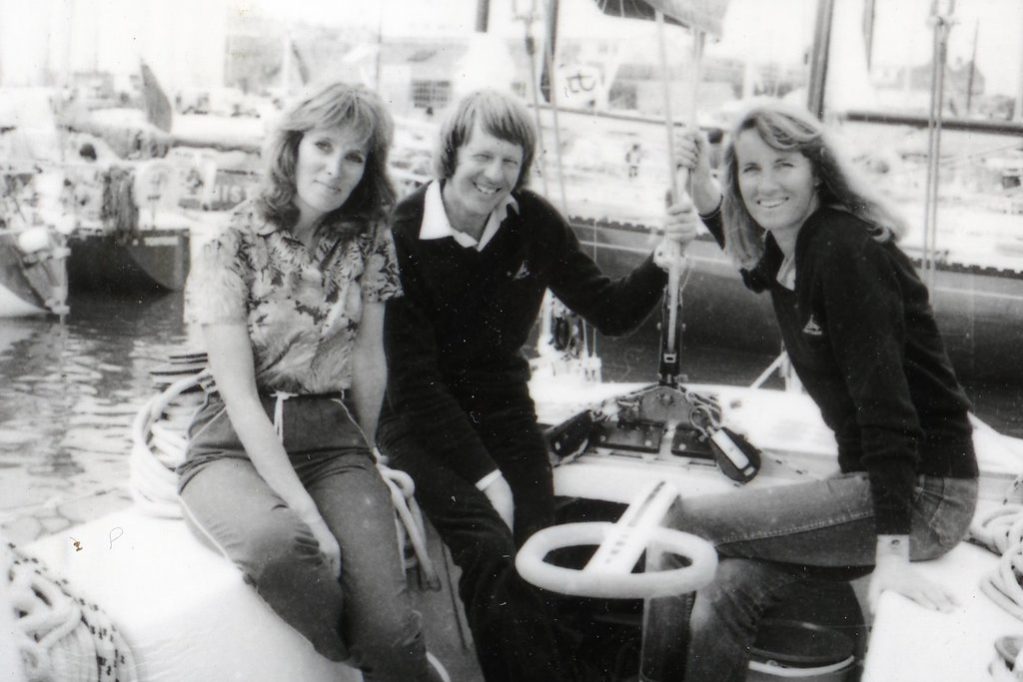 Hello all, a bit more about ALONE AROUND THE WORLD, with a couple of nice pictures.   Here is one of Rob and Naomi James and me on the boat Colt Cars, when we first met and were planning the film of Naomi’s single handed sailing voyage around the world.   Sadly the timing was all wrong for us, Rob had been really keen on the idea of the film, but Naomi was rather shell shocked by all the media and hullaballoo and was not quite so keen.   Tragically Rob died in an awful sailing accident and although Naomi nobly stuck with the movie for quite a while after that, eventually we all realised that the life had gone out of the project and it quietly went away.  We got quite far with it, at first it was planned that I would take the part of Naomi, until I understood, with the sage advice of David Puttnam, that we would never get it going with me as the ‘star’.   Demi Moore (GHOST), an exciting choice, given her new star power came on board (forgive the pun) for a while and then Rachel Ward (AGAINST ALL ODDS), who would have been very good, in my opinion.   Now we are trying again  and I think we have a better chance of getting it made.   There is an appetite for women’s stories like this, helped by Reece Witherspoon and her excellent film WILD, which did not exist in the eighties and very importantly Naomi has much more enthusiasm for the film, providing we tell her story properly and honestly.   I am 100% in agreement with that…too many great stories have been ruined by big money, trying to make them fit a commercial ‘bill’, when they were already good enough  as they stood, without ‘dressing them up’, often making them unrecognizable.

I have been going through some of my old memorablia and here a couple of pics for your entertainment.   They include the young David Hemmings, when he and I were together and learning to ride properly…think he did pretty well in THE CHARGE OF THE LIGHT BRIGADE.   I remember being at a private screening of that film arranged by friend, the late great Sammy Davis Jr and him (Sammy) standing up, as DH led the Charge as Nolan, waving his arms about and yelling at the top of his lungs “Go..oo..ooo David”….

Here also is a nice fashion pic taken by Patrick Litchfield for Vogue, I was flattered to be photographed by the Queen’s cousin.

Having just started going through pictures and other stuff about the 50 years of my career, should have a few more interesting items for you soon.