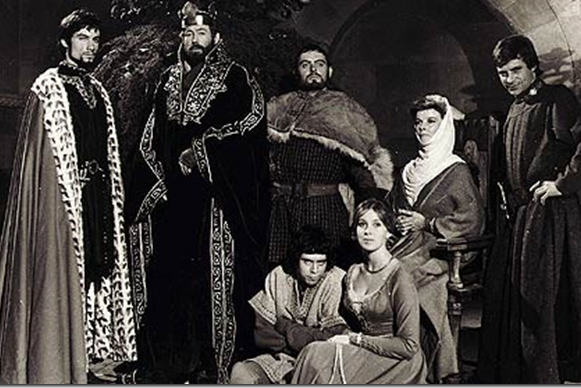 Here it is again…Christmas…I have a few fond memories, don’t we all?   Apart from the obvious ones like watching my grandchildren opening their Christmas presents and many family dinners over the years, especially the excitement of finding a sixpence in my Christmas pudding as a child…do we still do that any more in England?   Now I suppose it would be a 5p piece wrapped in greaseproof paper.   Here are a couple more:

THE LION IN WINTER was filmed in the winter, the film is about a royal Christmas family gathering in 1184, full of arguments and acrimony. People think the film is about History and all that…but it isn’t, it’s about families at Christmas and how that can bring out the best and worst of us.  This story brings out the worst and the battles between husband and wife, father and sons, man and mistress are a sights to be seen.   The film may be re-released I am told.

The real Christmas came right in the middle of our shoot in Ireland. Most of us went back to England , but Peter O’Toole stayed behind, as there was an outbreak of foot and mouth disease in the UK and he patriotically refused to ‘bring it back to Eire’. We all had to march though buckets of disinfectant at the airport. Katharine Hepburn stayed behind with John Huston, who gave her some antique earrings…”pretty but I’ll never wear them”, so she gave them to me, swapping them with the present she had bought for me, which she liked much better.keeping that and giving me the earrings…..” You dont mind do you”, she said when I turned up for tea, to receive my Christmas present.   Her secretary, Phyllis was very disapproving…” Mr Huston wont like it”……”Mr Huston wont know”, was the answer!

I also think of CERN. When I ran the family business and we had our contract to supply French speaking English administrative staff to CERN…the Merrow mafia, as they were fondly called…I hauled myself out to Switzerland each Christmas over the ten years we were there and laid on a nice dinner party with food and more for our people. We were often joined by our CERN supervisor, M. Georges Leroy and once I took the entire London office out as well and we all partied together…with dancing and karaoke all round. Since we were in Geneva, snow was pretty well guaranteed and it was lovely and Christmassy. Geneva is a beautiful city.

I have been dealing with chasing a couple of orders online I have made and found myself adopting an “online” computer voice to speak back to the computer…it’s amuses me and keeps me entertained through the whole boring process.  It seems to work, the Computer understands my dreary monotone very well and chats back happily with all the required information…if only it knew how I really feel, maybe it will before long with AI!

A Nachi-Fujikoshi Corp. industrial robot operates during a demonstration at the International Robot Exhibition 2015 in Tokyo, Japan, on Wednesday, Dec. 2, 2015. The expo runs through Dec. 5 under the motto “making a future with robots.” Photographer: Tomohiro Ohsumi/Bloomberg

Have a wonderful and blessed Christmas my dear readers and a safe, Happy New Year.