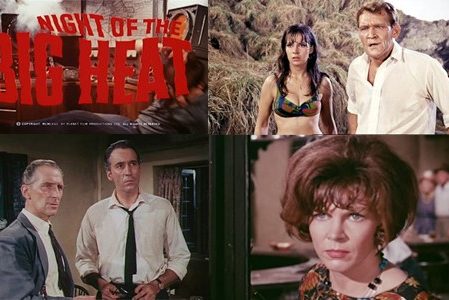 Oh dear we were careless this week, we lost not one but three dearly loved actors this week.  I worked with two of them, Christopher Lee and Ron Moody and remember them fondly, the third I did not know, Richard Johnson, but fine actor he was, great Shakesperean actor.   I was in THE NIGHT OF THE BIG HEAT …or ISLAND OF THE BURNING DAMNED (the US distributors liked that title better  ! ???)  Christopher was good to work with and nice to talk to.   The main passions in his life apart from his work seemed to be his beautiful Danish wife and golf.   He was a consummate professional…ours was a horror film and of course he had been doing these for a long time, so maybe the passion had wained a little.  But he was working with two people he liked very much and admired, Peter Cushing and Terence Fisher, our Director…I loved the first and greatly respected the second.   Peter was as close to a saint as you could hope for, a kind, gentle loving man who worshipped his beloved wife Helen and never got over her death, I think that’s what killed him in the end.   Christopher sort of protected Peter, the more vulnerable soul, when we were all mucking about and telling silly jokes (trying to keep warm), as you do on set and somewhat puzzled Peter with our antics.  We were doing the usual fun and games of decent horror and spent a freezing February running around half clothed ( at least I was) covered in glycerine (sweat!) and hiding from terrible unseen forces from the nether world….all in the line of duty as actors!!  I sometimes think that the public doesn’t realise what low men on the totem pole, we actors are in the scheme of things in movies, unless you’re a big star, bringing in the big bucks and need to be pampered (for now), until the big bucks dry up.

Ron Moody was the other good soul who just left us. (remember his great Fagin in the musical OLIVER).   I did a very good BBC TV play with him way back, with lots of chat and interest called  I WANT TO GO HOME.  Ron was unmarried at the time, around 40′ ish, living at home with his mother and angsting about never finding a good wife.   Well apparently he did, because he ended up with six children.  For ever after when we would meet at odd functions, he would never stop talking about them….. trying to keep up with them, how clever they all were and generally clucking about them like a mother hen.  Ron you were a terrific talent and we will miss you.

Well,  one actor is, I am glad to say, alive and living very well…SIR Kevin Spacey.  I am delighted he was offered his well deserved knighthood, though he’s not allowed to use it (but we know he has it).  Dont know if he will keep 100 men or ride a destrier or joust, with a lady’s scarf entwined in his helmet, but I do know that he single handed saved the Old Vic theatre in London from deteriorating into a second class venue (“across the river…too difficult to get to”) and turn it back into a magnificent, world famous theatre, showcasing wonderful work and talent, not the least his own.  Sir Kevin you are a class act and I am proud to be part of your chosen profession.