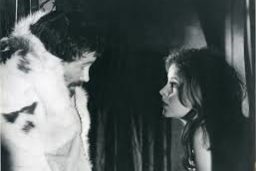 Think I mentioned that I went to a couple of events at the Academy of Motion Picture Arts and Sciences while I was in London in April.   One close to my heart was the tribute to Douglas Slocombe, Oscar winner, now 102 years old, leader of his craft, talented, gentle man and loved by all.   As I have said, this what gives me the thrill of being in this industry, working with amazing talent in this thrilling industry.   Dougie was the DOP on a little picture I did in 1968:  THE LION IN WINTER, brimming with extraordinary talent which included Peter O’Toole, Katharine Hepburn, Anthony Hopkins and Timothy Dalton, the latter two in their first film.   The lovely Nigel Terry, in his first film was also on board and the wonderful, funny John Castle and terrific

Nigel Stock, who kept the “boys” out of trouble on their days off.   He formed a bird watching troupe, which we all called ‘The Puffin Patrol’ and the lads would dutifully march off with Nigel S to watch birds, when they weren’t needed on set.   Nigel S, incidentally, had been a Chindit during World War II, a pretty fierce bunch, but a gentler man, you could not find.

Dougie was ably supported by a terrific team with Chic Waterson, his camera operator, our link to Dougie, when he was taking his time creating the wonderful lighting.  Chic did a couple of other little films with Dougie… starring Harrison Ford about a character called Indiana Jones!   Camera Assistant was Robin Vidgeon, who later became a DOP ….in the other picture in this blog at the same event, we are all laughing uproariously at Robin talking about Dougie.  The other picture is of me talking to Oscar winning Documentary film maker Jon Blair.   I cant say I haven’t worked with/known a few of the very best in this business.   Lucky me.